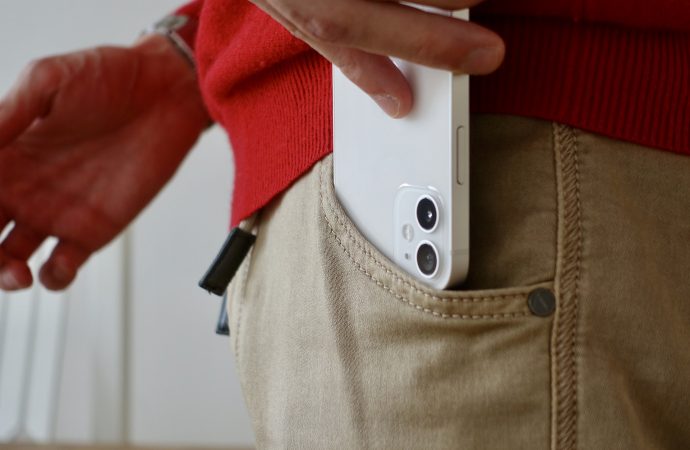 Image by Lukas Gehrer from Pixabay

If you live in Berkeley, California and go to the store to purchase a cell phone, you’ll either be greeted by a sign or given a handout that warns you about the risk of carrying your cell phone in the pocket of your shirt or pants or in your bra. The concern is that by keeping the phone on your body, you’re exposing yourself to radio frequency radiation that “may exceed the federal guidelines.”

In May, the Berkeley City Council unanimously passed an ordinance making it mandatory for consumers to receive this information– including that “the potential risk is greater for children.”

A Yahoo news story cites certain media outlets, like the New York Times, that reported there isn’t enough scientific evidence to prove cell phone radiation may cause cancer. But the ordinance apparently wasn’t about this continuing debate, It was about bringing attention to the fine print written by the manufacturers of mobile phones that consumers may overlook.

Dr. Robert Morris, Senior Medical Advisor to the Environmental Health Trust, a non-profit at the forefront of cell phone radiation research, makes the point that radiation testing isn’t done with the phones next to the body and that if the phones were tested that way, “they would be found to emit too much radiation to pass current standards.”

Dr. Morris goes on to say this about the worldwide use of cell phones today: “This may very well be the largest uncontrolled health experiment in human history. Although we can’t be certain about health risks related to cell phones, the International Agency for Research on Cancer (IARC, part of the World Health Organization) has concluded that the radiation they emit is a possible cause of cancer. Those cases may take decades to develop. So, if there is a risk, we won’t know for sure until tens of thousands of people have died. In the meantime, it seems prudent to reduce exposures, especially when doing so can involve something as simple as using headphones. Improving consumer’s access to warnings about potential risks, warnings that are already in the phone, is a no brainer. Why is the industry fighting this?”

The Natural Resource Defense Council wrote this in a brief supporting the Berkeley Right to Know ordinance: “An individual cannot choose whether to minimize her exposure if she does not know that it is occurring.”

Would you like to see more communities pass a Right to Know ordinance like Berkeley’s? Based on what different cell phone manufacturers say in the fine print about how far away from your body to have your phone, will you now be likely to follow their guidelines? How concerned are you about children, especially youngsters, being more vulnerable to radiation?

Some tips on reducing your exposure to radiation:

-Buy a phone with a low Specific Absorption Rate (SAR), which indicates how much radiation a phone emits. Using a phone with a low SAR means your body will be absorbing less radiation.
-Use the speakerphone vs. putting the phone next to your ear.
-Text vs. call when possible.
-Keep phone conversations short. Better not to talk when you’re getting a weak signal.
-Keep the phone stored with the keypad facing you, so the electromagnetic field is directed away from you.
-Don’t carry your phone on your body. Pocketbooks and briefcases are preferable.
-Don’t sleep with your phone or use it as an alarm clock. In addition to getting less radiation, you’re likely to get a better night’s sleep.
-Shut your phone off when not in use, and even better yet if your phone has a removable battery, take it out so it’s not transmitting.
-The blood/brain barrier in a child’s skull is thinner, so children absorb more radiation when exposed to cell phones. Do your best to keep cell phones away from children, especially infants and toddlers. Explain to older children why reducing exposure to cell phone radiation is good for their long term health.
-Pregnant women should consider seriously limiting their use of cell phones.
-Opt to have a land line in the house and use it when possible. That’s good advice for anyone who wants to reduce the effects of radiation.

For further information on what the cell phone manufacturer’s fine print says, go to Show The Fine Print