Brought back from the dead 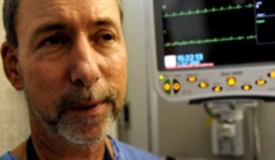 Is it possible to reverse death for some lucky people? Just ask Joe Tiralosi of Brooklyn, New York, who began feeling sick one day driving in New York City. He made a smart move by heading to the emergency room of New York Presbyterian Hospital. It was there that he literally dropped dead. But talk about being in the right place at the right time.

A medical team worked on him for almost an hour–cooling his body to protect his brain cells, along with other vital organs, and giving him approximately 4,500 chest compressions as they took turns doing CPR. They brought him back to life.

Tiralosi recalled the experience on CBS Sunday Morning: “It was like they shut the lights out and I just collapsed and fell on the floor. My heart stopped, and the nurse was—I heard screaming. And that was it.”

Dr. Sam Parnia, who specializes in resuscitation research and is the author of “Erasing Death,” calls it “astonishing” how far we’ve advanced medically to be able to bring people back after they’ve died. He says that new techniques, like cooling devices, give doctors the precious time they need to access the situation and figure out how to get the heart pumping again: “So, for example, if somebody were to suddenly collapse and die at home, what we could do is go into the freezer and take out our frozen peas, frozen vegetables, put them on the body, and try to do CPR at the same time, so we can slow down the rate by which they’re getting brain damage.” The odds of being revived may be small, but it does happen.

Do hospitals and emergency medical personnel sometimes stop CPR too soon? Dr. Parnia acknowledges that performing CPR is hard and tiring work: “A lot of doctors will stop compressions after about 20 minutes, but we know from research that if you go on for 40 minutes to an hour, your chances of bringing someone back to life is much, much higher.”

Joe Tiralosi is a walking testimonial for the techniques employed to bring him back from the dead. Now 5 years later, he couldn’t be more grateful. He shares how those doctors truly gave him the best gift: “Well, gave my life back; they gave me the chance to live again. Sometimes people tell me, ‘You know, being back,what’s the best day that you can remember?’ And honestly, every day is the best day to remember.”

Good for You to the doctors and medical personnel at New York Presbyterian Hospital for the incredible way you saved Joe’s life!