Are U.S. jobs vulnerable to workers with H-1B visas? 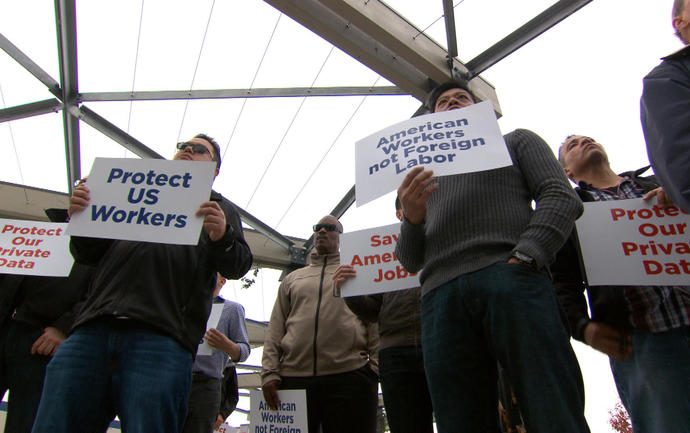 "We are sorry to inform you that as of Feb. 28, you will no longer have a job. We're going to outsource your position to this company in India." That's what Robert Harrison, a senior telecom engineer with the University of San Francisco Medical Center, said happened to him.

He candidly shared with 60 Minutes correspondent, Bill Whitaker, his reaction to the news:

“I can’t wrap my mind around training somebody to take my position. You know, it’s my livelihood. How am I supposed to feel?”

As Whitaker reported, Harrison was one of about 80 IT workers at the UCSF Medical Center who found out they would be replaced by younger, less costly foreign workers.

Whitaker interviewed former Congressman Bruce Morrison, who in 1990 wrote the legislation creating the H-1B Visa. But as Morrison points out, the bill was only meant to allow U.S. companies to fill job shortages with skilled foreigners, if they couldn’t find qualified American workers. But he told Whitaker:

“I’m outraged. The H-1B has been hijacked as the main highway to bring people from abroad and displace Americans.”

Morrison went on to say:

“The workers being brought in don’t know anything more than the workers they’re replacing. They know less. And that’s why they have to be re-trained or trained by the American workers being laid off. This is not about skills. This is about cost.”

To find out more about the loophole in the law that permits this practice and the toll its taking on American workers faced with training their replacements, watch the March 19th edition of 60 Minutes.