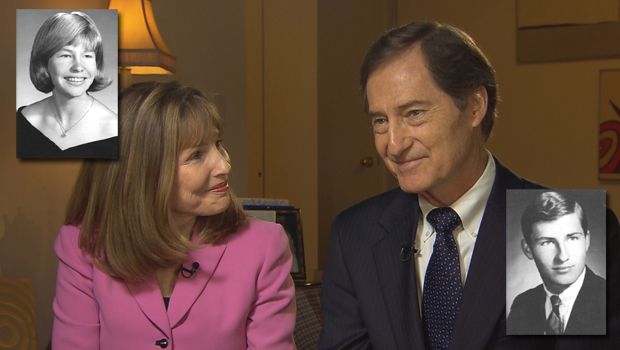 What is it about the power of lost love? Read the stories of people who have reconnected years later and rekindled meaningful relationships from their past.

Every now and then you hear a story about a couple who first met in high school or college or sometime thereafter and fell in love. But as sometimes happens, the relationship ended, and they went their separate ways. Fast forward many years later. They’re both now single, widowed, and/or divorced when they meet again. Before they know it, they’re rekindling their love– quickly knowing that they’re meant to be together. That’s the subject of a CBS Sunday Morning News cover story.

Reporter Tracy Smith interviewed Helen Fisher, a Rutgers University anthropologist, about the power of lost love: “First of all, you never forget the person. And if the timing is right and they come back, you can trigger that brain circuitry for romantic love almost instantly and be back in love again.” Smith cites a study done by a Cal State University professor that found there was a more than 70% chance of past loves permanently rekindling their relationship.

Consider the story of Donna Hanover, former First Lady of New York City, who had a very public divorce in 2001 from then mayor Rudy Giuliani. In 2002, she reconnected with her high school boyfriend, Ed Oster, who too was divorced. The following year they happily married. Oster was asked by Smith, “Will you every let her go again?” He responded: “This is my lost treasure found, never to be lost again.”

For couples like Hanover and Oster, it seems like the lyrics of an old song apply, “Love is lovelier the second time around.” If you have a story about lost love found, we’d like to hear from you.