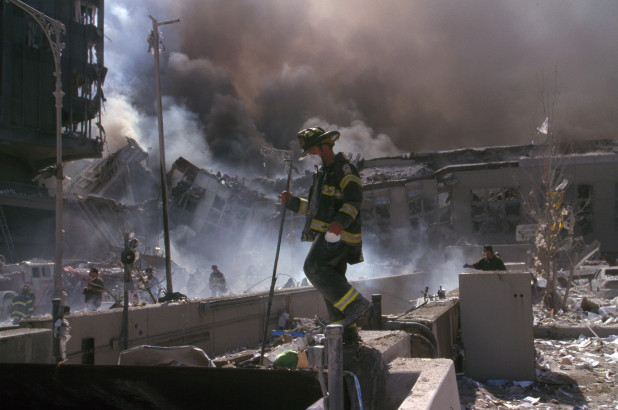 The NY Post reports that with the 17th anniversary of September 11th fast approaching, “nearly 10,000 people have suffered cancers linked to the toxic dust and smoke at Ground Zero.”

The Federal World Trade Center Health Program keeps a tally of 1st responders, residents, workers, students and others who have reported cancers believed related to 9/11. It’s now at 9,795 & counting.

Dr. Michael Crane, medical director of the WTC health program at Mt. Sinai Hospital in NYC says, “We get these referrals 15 to 20 times a week.”

The Post tells the story of Tom Wilson, an NYPD Sergeant at the time, who worked at Ground Zero for 344 hours. He developed sinus & gastrointestinal disorders soon afterwards and is now fighting an aggressive & painful form of tongue cancer diagnosed in 2008. Currently working for the Suffolk County, Long Island Police, Wilson says he has no plans to retire:

“I probably could go out on disability, but working is my therapy–it helps me. God forbid there’s another 9/11. I want to be able to respond to that.”

How do we begin to say thank you to a man like that!