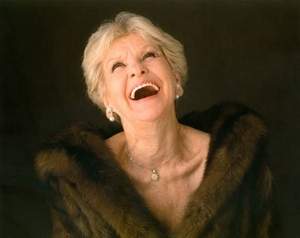 Elaine Stritch was perhaps best known to audiences today for her role as Alec Baldwin's one-of-a kind mom in the hit TV show 30 Rock. But the legendary actress, comedienne and singer had a career that spanned decades--taking her from theater to movies to television. As Joe Dziemianowicz wrote in the NY Daily News: "She left a showbiz legacy that no one can match." He described the legendary entertainer, who died July 17th, as "feisty, fearless and relentlessly frank."

New York Times writers Bruce Weber and Robert Berkvist referred to her as “a living emblem of show business durability and perhaps the leading interpreter of Stephen Sondheim’s acrid musings on aging.” It was one of Sondheim’s songs, “I’m Still Here,” that was an anthem for her to the very end. She survived cigarettes, alcohol. and dealt with diabetes, all of which she candidly reflected on in her Tony award winning one woman Broadway show, Elaine Stritch at Liberty. The HBO special telecast of the show also earned her an Emmy.

The Detroit Free Press quotes one of her nieces, Sally Hanley, who had this telling comment about her beloved aunt: “The gruff exterior, there was a huge heart inside, and I think that’s what people were drawn to.”

The Michigan native, who made New York City her home until returning to Michigan last year to be with her family, was honored by Wayne State University in April 2013. Professor John Wolf, Chair of the theater and music department, had this to say: “The impression that I was always left with of Elaine was how quickly you came to love her. She was a fighter and someone who persevered.”

In a NY Times column appraising her incredible career, Charles Isherwood concludes with the lyrics to the song Something Good from The Sound of Music, which she performed as part of her solo Broadway show: “Nothing ever comes from nothing, nothing ever could. So somewhere in my youth or childhood, I must have done something good.” Isherwood writes: “She still seemed to wonder if she was worthy of our admiration. She was.”