In the dark over power grid security 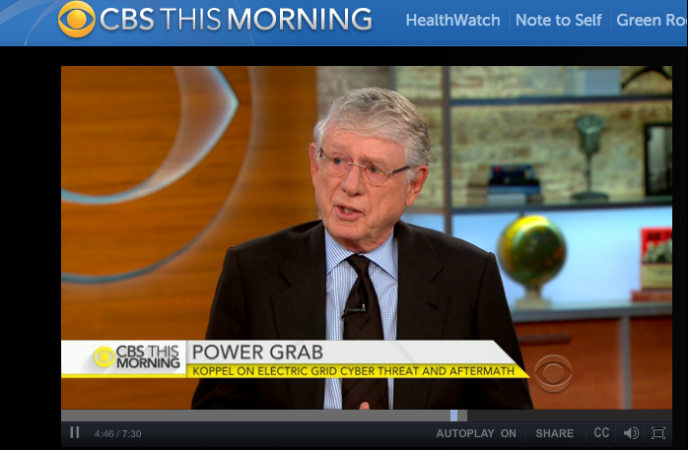 Can you imagine what it would be like to be without power for weeks or even longer? Could we survive such a nationwide blackout? In a CBS Interview, journalist Ted Koppel discusses his latest book “Lights Out” and the vulnerability of our electric grid to cyber attacks and more.

When asked which countries could access and potentially attack our grid, Koppel explained: “They are already in the grid. I was told that by the former Chief Scientist of NSA, he stated categorically the Russians are in, the Chinese are in. The Iranians may be on the verge of getting in. And then at the bottom of the capability scale are folks like ISIS, terrorist groups.”

Large power outages have happened before and a nationwide blackout could happen if our vulnerable grid is hacked. If this happened, the Department of Homeland Security would be the agency to protect us, but Koppel says they aren’t ready: “I’ve talked to every former Secretary of Homeland Security, and they all acknowledge there is no plan.”

Former Defense Department official Paul Stockton maintains that the government does in fact have a plan and that major power companies are strengthening systems so they could respond to a large-scale attack. But he also admits: “Their readiness is not where it needs to be, given that the adversary continues to strengthen the sophistication of the weapons that will be used against the United States.”

Koppel says that the internet is a valuable part of our life and society but we also need to recognize the danger that can come from it. So what can we do to prepare and to protect our loved ones? Here’s Stockton’s advice: “Average citizens need to be able to take care of their own families and their own neighborhoods and their own communities, and not assume that Uncle Sam is somehow going to magically bring in the cavalry and rescue them.”

But cyber-attacks aren’t the only threat to our grid. Electromagnetic pulse (EMP) could also cause a nationwide blackout. EMP could be caused by a solar storm or a man-made attack. All it would take is shooting a missile with a nuclear device high above our atmosphere. Sign our petition to shield the electric grid now: https://www.change.org/p/tell-congress-to-shield-the-grid-now-all-of-our-lives-depend-on-it