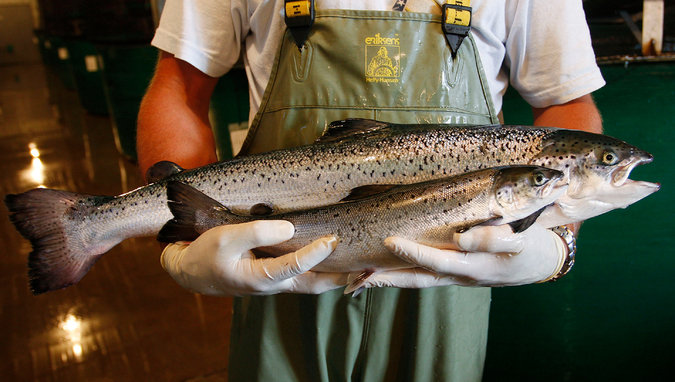 Do you want to eat genetically modified salmon? Well, like it or not, it looks like it will be coming to the marketplace. The Food & Drug Administration (FDA) has just approved it, despite the serious concerns of environmental and consumer groups.

They question whether the safety studies were sufficient. Also, how can you ensure that even a small percentage of genetically engineered fish won’t get loose and eventually affect the wild salmon found in our oceans and rivers.

It certainly doesn’t seem like genetically modifying salmon is being done to benefit the health of mankind. Apparently the company behind it, AquaBounty, is just looking for a way to grow the fish twice as fast as today’s farm raised salmon. And we consumers, who are not exactly hankering for it, will end up being the guinea pigs who eat it.

Since the FDA doesn’t require genetically engineered food to even be labeled, how can you truly know what you’re getting when you go to a market or order salmon at a restaurant? The FDA apparently doesn’t think there’s enough of a difference between genetically modified foods and conventional foods to merit a GMO label. So they’ve decided for all of us what we have a right to know–or in this case not know. As a consumer, how do you feel about that? There is an old adage: “What you don’t know won’t hurt you?” But if it turns out in the long run that’s not the case with what some, like Senator Mark Begich of Alaska refer to as “Frankenfish”, wouldn’t it be nice if we could get a money back lifetime guarantee from the FDA & AquaBounty?

Consider this: Wild salmon has the most health benefits–the most heart healthy Omega 3 fatty acids. And a reminder that farm raised salmon, which is far lower in Omega 3’s, is likely to be injected with chemical dyes to give it that nice salmon color and fed grains, along with antibiotics that we humans ingest. All this is done with cost and a company’s profits, not with your health in mind. And when it comes to genetically engineered salmon, how much do most of us even know about how the fish are modified and fed to achieve their larger size and faster growing rate. Do you think injecting growth hormones from Chinook salmon into fertilized salmon eggs is a good idea? How can we know for sure it’s 100% safe for long term human consumption? Worth further checking into?