Driving while distracted: Why can’t we ignore the pings? 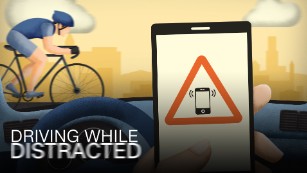 Just how addictive is the sound of a ping? Has it gotten you to check a text while driving, even though you know it can increase the risk of an accident?

CNN reporter Kelly Wallace wrote this about the power of the ping:

“Our smartphones are affecting our brains without us even being aware of it. When we hear the ping of an incoming text, social media update or email, our brains get a hit of dopamine, a chemical that leads to an increase in arousal, energizing the reward circuitry in our brains. And that expectation of a reward — Who’s texting me? Who tagged me on social media? — leads to a higher burst of dopamine than the reward itself.”

Wallace interviewed Dr. David Greenfield, a psychiatrist and founder of the Center for Internet and Technology Addiction, which provides workshops on the abuse of technology. He explains why people would put their own lives and the lives of others in jeopardy–all because they feel this “compulsion” to immediately respond to a ping:

“The parts of the brain that say, ‘OK, how important is this text? Is this text worth dying for? Is this text worth killing somebody else for?’ The answer, of course, logically, would be ‘no,’ but if you have less access to that part of your brain when you’re in this state, which seems to be the case, then you’re not really using your judgment.”

Jennifer Smith knows only too well the heartbreak of losing a beloved parent. Her mother was killed by a distracted driver back in 2008. She founded StopDistractions.org to offer support to victims and their families and increase awareness of this growing problem. She recognizes the challenge of getting people to change their behavior:

“Because of the addictive nature of all of these things, people lack the self-control. I don’t know what the answer is, because our brain is craving this. Our brain is wanting this more than anything else, and it just disregards everything we know.”

“It’s like we need a mass education campaign, but I don’t even think that’s enough to beat out this reward system we’re getting in our brain when we’re like, ‘Ooh, something’s going on. I want to see what it is.’”

But taking your eye off the road for even a second can have lasting consequences. Matt Boeve was widowed in 2014. His wife died because of a distracted driver. It’s well worth thinking about what he had to say: