How to Take Criticism Well 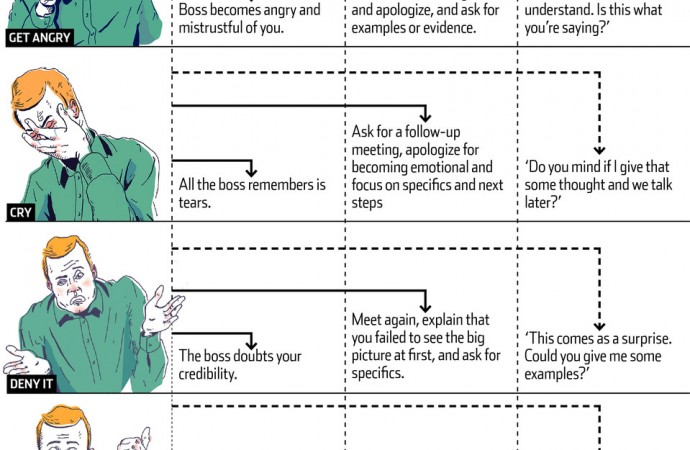 How well do you take criticism from your boss or colleagues? While negative feedback can be difficult to deal with, there is an art to receiving it in a positive way that allows you to learn from it and thrive in the workplace.

Wall Street Journal columnist, Sue Shellenbarger, gives the example of an employee, Gillian Florentine, who let her emotions get the best of her when confronted by her boss about the way she had handled a project. Florentine said she had at first “felt offended and personally hurt” by the feedback, which got in the way of her better judgement. But after she calmed down and talked it through with her boss, they were able to resolve their differences.

A 2013 survey by the Society for Human Resource Management and Globoforce found that 94% of human-resource managers prefer to give their employees positive feedback, so it’s understandable that many employees aren’t sure how to respond when they find themselves on the receiving end of negative criticism. They may become defensive or emotional.

If you’re having a tough time processing criticism you’ve just received, Brad Karsh, president of Chicago-based consulting and training company JB Training Solutions, recommends requesting to be given 24 hours so you can properly respond to it: “Say, ‘thank you very much for the feedback. What I’d like to do is think about it.’” By taking your time to process the feedback, he says you’re more likely to understand it.

If the feedback makes you uncomfortable because it’s said with others present in the room, Karsh has this advice: “Don’t create a scene. Just nod and keep a smile.” Let the person know later that you would prefer to receive any criticism in private in the future.

The next time you receive criticism, you may want to remember what Garrett Miller, a productivity consultant, says that he’s learned from past experience: “All feedback has some truth in it.” So he suggests posing this question to yourself: “What is the nugget that I can pull out of this?”